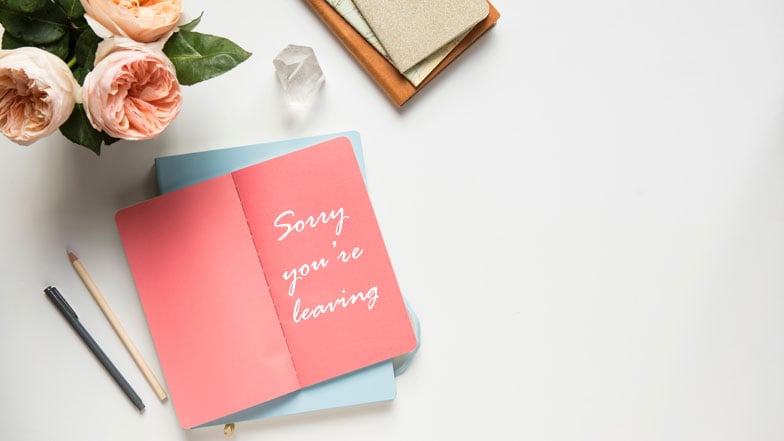 So it’s official: your last day has finally come…

You’re already counting down the hours ‘till you’re home-free (see also: are able to venture into a new role, education, or anything else). But whilst you may feel like spending it acting smugly about your swift exit, it’s probably best to keep your professional face on until you’re actually out the door.

To make sure you know exactly what (and what not) to do, here are four things you should never do on your last day:

Although you’ve probably wrapped up most of your bigger bits of work before your last day – there’s still likely to be the odd loose end you’ll need to tie up.

So set aside some time to not only double-check your work (and handover) is complete, but also to ensure your colleagues are up-to-speed with any new responsibilities or tasks they may be taking charge of after you’ve gone.

After all, the last thing anyone wants is for something to go wrong when you’re not there to fix it. Sure, you encouraged people to stay in touch, but that was intended as more of a ‘let’s meet for drinks’ thing, rather than a ‘come back and fix this code’ thing.

It’s also a good idea to have one final catch up with your manager too.

Even if there’s nothing to cover, it’ll ensure you leave on a positive note. You might even get a ‘thanks for all your hard work’ sentiment. Tears optional.

OK, we get it. You’re probably not feeling particularly conscientious on your last day of work – but that doesn’t mean you should just flip your desk and run.

Because leaving a variety of old bits of paper, miscellaneous stationery, and a box of cereal circa 2016 for your colleagues to sort out probably isn’t the best way to exit an organisation. Especially when the new guy/girl is starting on Monday and your boss is still trying to clear up the remanence of your novelty mugs.

Instead, just stick to heartfelt goodbye emails. Then, grab a duster, a bin bag, and a box of tissues (you know, for the crying), and put some time into clearing up properly.

The same goes for wiping any personal data off your computer. Because let’s face it, not everyone is going to appreciate the effort you put into finding the perfect desktop wallpaper.

Nobody likes it when you leave without saying goodbye.

And whilst you might’ve already had your exit interview by the time you reach your final day, there’s more to leaving a job than just covering the formalities (which may also include handing in your door pass, uniform, laptop, or anything else that belongs to the company).

You could organise a leaving lunch, for example, or arrange dinner, or drinks with your colleagues. That way, you have one final opportunity to reminisce, chat, and say your goodbyes. Hey, you might even get a few free drinks out of it.

You can also send personalised goodbye emails to let your colleagues and manager know how they’ve helped you over the months/years. After all, they (might) be sad to see you go.

Finally, no matter how much you couldn’t stand your job, badmouthing your employer, colleagues, or the role itself on your last day is always totally uncalled for.

Not only is it likely to leave a bad impression (and/or throw any future opportunities with them out the window), it could also make your colleagues feel badly about sticking around. After all, they might actually enjoy working there. Not to mention had a totally different experience to your own.

The same goes for humble bragging. For example, discussing money, benefits, or how much better your new job will be than this ‘sinking ship’ are all massive no-nos that will do nothing but bring others down.

Instead, keep your venting localised to friends and family outside of work. Because your work-related bridges are best left intact (especially as word quickly gets around within an industry).

Oh, and you know, you probably shouldn’t steal office supplies either…no matter how much you need a new stapler.

Other things you shouldn’t do: Avoid doing any work, call in sick, graffiti ‘your name woz ‘ere’ on the wall, drink wine from the bottle whilst pointing and laughing at the pending demise of your soon-to-be ex-colleagues.

Eight of the greatest ways to resign

Eight signs you need a holiday

Four things to take to a job interview

How to: Prioritise work